I have always been a gamer. Even my choice of friends eventually boiled down to who had the best video games consoles when I was younger. My householde was too poor to afford the original PS when it first game out. My first console ever was a sega master system and that was about fifteen years after its release. The only games I owned were Ghostbusters, which was a strange title where you would attached a vacuum cleaner to the top of the car and drive around sucking up ghosts, and Alex Kidd. That is I owned Alex Kidd because it came with the system, not that you suck up Alex Kidd using a vacuum cleaner, although I feel that would have made it more interesting.

It wasn’t a very good game. In fact if it wasn’t for Alex Kidd then I would have said my purchase of the master system was pointless. However, one of my friends had a sega, I can’t remember what kind, with a football game on that we played a lot and I had access to a PS1 through another, so my childhood was mostly spend playing games albeit on other people’s consoles.

Now, in the space year 2013, I have struggled to get into a lot of games. I have owned, played for a bit, then got bored of several mainstream titles including, but not limited to, Gears of War, Flashpoint, Call of Duty and Battlefield. So my question is, why? Why am I finding it so hard to enjoy these titles? You have to image that retro games are retro for a reason. Because either they didn’t work, or have since been surpassed. All I know is, if I want to unwind, I reach for Crash Bandicoot before I reach for Skyrim.

The modern day game is focused around realism. It’s a really frustrating fact. Back in the day, a game could be about absolutely anything. It could consist of a Marmite monster travelling forwards in time to find a world conquered by Golden Syrup and is tasked with freeing the world from the tyrannical pancake beast. But today, the ideas bucket appears to be running dry and most developers run to first person shooters for their yearly income.

The day we give up on achieving ultimate realism is the day gaming starts becoming fun again. Health meters are one of the biggest casualties in gaming and I think the industry is weaker because of it. Sure, it’s not realistic to be able to put a number next to how injured you are, or to gaffer tape a medikit to your face and be all right again, but it beats the hell out of sitting behind a brick wall for a few minutes waiting for the blood to disappear from your screen. I mentioned a while ago that Painkiller was one of my favourite shooters of all time which is still true. It’s a fun, fast paced, flowing, free for all that doesn’t let a little think like realism get in the way of having a good time. Sure, the story was absolute rubbish but the game play more than made up for it. The enemies were interesting and varied and there were endless different ways to kill them all. The shot gun was extremely satisfying and sent monsters flying half way across the map with a single shell, there was a gun that fired logs at enemies attaching them to walls, trees or whatever else was around and a gun that shot shurikens and lightning.

What does Call of Duty have to compare? More realistic guns, I would concede, but are they fun to use? Ducking in and out of cover, firing at anything firing back isn’t my idea of a good time, especially when, in some cases, you can’t tell if an enemy is dead until your face has been replaced with lead. Spec Ops is the only game that is an exception and that’s only because of the storyline. It doesn’t change the fact that the game play is uninspiring and uninteresting.

Even RPGs have evolved. I’ve played Oblivion recently and Dragon Age Origins and was disappointed with both. It’s a bad sign when I have to use the developers console in order to complete a game, which I had to do for DoA. I did this for Oblivion too, but not even cheating could save it. I found it boring, bland and unimersive. What kind of world do we live in when we’ve even made fantasy games dull? The combat wasn’t visceral enough, it felt like I was swinging my sword through thin air even when the enemy was two inches away and it had a habit of shoving you into an area and not telling you anything. Plus the conversation system was a load of rubbish that took me out of the game every time I had to use it.

Dragon Age was just generic, however the story line was enthralling enough that I had to keep playing it to the end, with likeable characters, solid story telling and well written conversation, I just didn’t want to have to deal with the combat so ended up cheating. 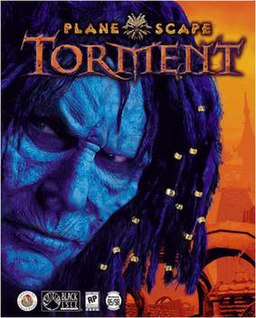 Compare it to games like Planetscape: Torment. Roughly 99.9% of people reading this would have just said, “Huh? What’s that? You’re just making up games now.” Planetscape is possibly the most underrated RPG in the history of gaming. It’s narrative is outstanding and compelling and, while combat trips over it’s laces and impales itself on its sword, the back story behind the characters, the games pacing and originality are what set it apart. You get experience based on your conversation techniques. Persuading an NPC to see things from your point of grants far more xp than smashing his head in with crowbar.

Bringing this rant disguised as a blog back on topic, modern day games have failed to hold my interest because they’re crap. Realism is boring! When will developers realise this? I play games to get away from real life. To enter new worlds, meet new people. To BE someone else. The less realistic the better as far as I’m concerned.

I long for the day we give up on ultimate realism and return our focus to making games FUN.