It’s getting increasingly difficult for me to continue doing these reviews, hence the six month hiatus from this site. For starters I’m poor and it usually comes down to me choosing whether to buy a video game or eat that week and not matter how good Mass Effect is, I can’t use it as nourishment. More’s the pity.

Another reason maybe that modern day games tend to be, let’s say, uninspiring. I’m not a fan of the Call of Duty games nor many others actually so it kind of makes sense that all the games I enjoy are old and it makes even more sense that the modern ones I enjoy tend to be remakes or rehashes of good games from yester-year. 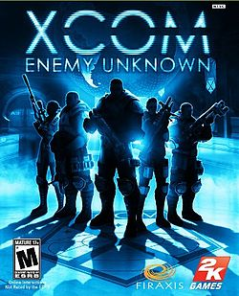 The original was exactly that; original. It featured new mechanics never seen before or since, with a possible except of the old GOOD Syndicate game, which made it rather hard to classify at the time. To be honest, I’m finding it hard to classify now as well. Third person, turn based, shooter with base management and some air combat as well? Or TPTBSWBMAAC for short.

Interesting concept and one that I found curiously compelling. I like my real time strategy so a game that feels like its in real time but allows you to carefully calculate your next seven moves as if your playing a rather violent version of chess is right up my alley.
You are the commanding officer of the X-COM Project (Short for eXtraterrestial COMbat Unit) and are charged by all the world’s governments to sort out the mess that they’re too busy for, and yet threaten to pull funding for the smallest thing like a very curious episode of Dragon’s Den. Where are their own military forces? You’d have thought they could spare a few men to help out when the future of the human race is in the balance.

But I digress. You start out with a rag tag band of mewing schoolgirls and have to turn them into hardened veterans while defending the Earth’s populace from increasingly frustrating alien enemies. You receive distress calls from various countries around the world and are plonked into a small map with between ten and twenty enemies and don’t get to leave until they’re all dead. Should you fail, or simply ignore a country for too long, their panic rating will increase and if you allow it to get too high, that country’s government will pull its funding. It’s still possible to complete the game without some countries, but it becomes incredibly more difficult.

While going through this, your tasked to capture and interrogate enemies and try to discover why the aliens are here as you build up your base of operations, which is possibly the most important aspect of the game. The aliens will keep on evolving, so if you get a few research projects behind, you’ll discover that the difficulty curve suddenly resembles a two hundred foot cliff face.

The actual combat involves you moving around your units into strategic positions and adequate cover and taking shots at the enemies while they try and do the same to you. Your shots have a percentage to hit and there is nothing that will increase the chance of your keyboard getting smashed more that your sniper missing a ninety nine percent hit chance. On the other hand, there is nothing that will make you smugger than ripping apart a squad of aliens in a single turn, especially if you kill an alien with a twenty percent hit chance along the way.

There is a lot going on in the game and this review has barely hit on a handful of them. The biggest thing I’ve missed out is the air combat, mainly because there isn’t any in this version. Sure, there pretends to be. You build up a few jets to take down UFOs but all you do is watch your plane shoot at the enemy while giving it a few buffs if things look hairy. Not that I ever needed to use any buffs as you don’t really need to bother with UFOs until towards the game and by then I had the best ship avaible and was killing every type of enemy craft with one or two shots.

X-COM is one of the games where I will happily be playing it for what I think is an hour or two, then decide to get a drink or a bite to eat and discover that it’s nearly four in the morning. It’s an extremely immersive game and I even found myself getting attached to the generic soldiers you get given.

If you haven’t already played it, which let’s face it, you probably have as I am about a year and a half late to the party, then I can’t recommend it highly enough.

9/10 – I’m removing a point because of the stupid bug that spawns a group of enemies right onto your squad AND gives them a free turn. I lost two squads because of it. I have never raged harder. (It’s worth noting that this has since been fixed…so they say.)